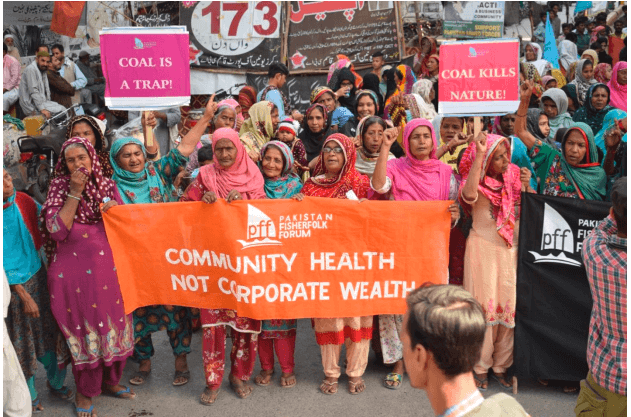 Pakistan Fisherfolk forum (PFF) has plans different weeks of action for climate justice. Strategically the PFF forms steering committees on provincial level and climate justice forum would forms that comprise on expert members from civil society, political parties, media and relevant stake holders from ministry of food, fisheries, agriculture, livestock, Revenue, Social welfare, PDMA, Planning and development department, EPA and health department and other. These committees and forums become instrumental in discussing the climate change and other environmental issues. In addition to this, the PFF carries out various public actions to projects and ventures (coal-fired power generation) that pose threat to environment.

Coal is a dirty energy, its demand and use is expanding in Pakistan. The major factor behind this shift to coal include; Pakistan’s increasing demand for energy especially for electricity, its narrative of using coal as cheapest source for energy generation and availability of local coal resources in Tharparker, part of early harvest projects of China Pakistan Economic Corridor (CPEC) involving investments of approximately US$ 13.520 billion for numerous joint energy ventures for coal mining and power generation. Pakistan has a potential of more than 300,000MW of wind energy. However, the present electricity generation from wind resources does not exceed 500 MW including large potential of solar energy.PFF took out a big Sindh people caravan under the theme of the Ending the killing coal.

No images available
No links available
BACK TO Campaigns
Newsletter
© 2022 Alliance for Climate Justice And Clean Energy - All Rights Reserved.