ISLAMABAD: Members of the proposed parliamentary caucus on clean energy met for the third time on October 6, 2021 in Islamabad to discuss the objectives of the caucus, where the participants underlined the need to launch awareness campaigns on clean and green sources of energy while focusing on transition to alternative sources keeping in view the best practices followed by various countries. 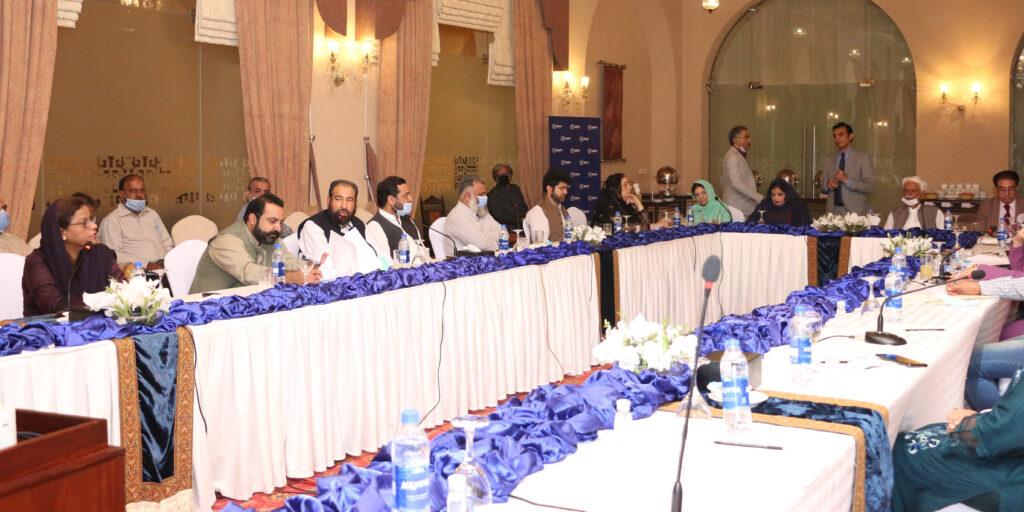 In the second meeting, Dr. Abid Suleri, Executive Director of SDPI, made a detailed presentation on various aspects of climate change and how some of the countries were dealing with the problem. He suggested different ways Pakistan could learn to play its role in reducing carbon emissions and improving the quality of environment.

He also suggested that Pakistan, in the COP-26 to be held in Glasgow, should urge the developed countries to assist developing countries financially and technologically in order to roll back their coal-based power projects. Dr. Suleri further said that Pakistan was the least emitter of carbon and least polluter of the environment but still among the top 10 vulnerable countries to climate change calamities. That is one immediate reasons why a parliamentary caucus on clean and green energy should be formed, he stressed, adding that the caucus is of much relevance and importance. He underlined the importance of the parliamentary caucus by highlighting its main objectives and also suggested that we need a robust campaign for generating funds for the green transition.

Munawara Bibi Baloch, Pakistan Tehrik-e-Insaf (PTI) Member National Assembly (MNA) from Balochistan, said that they, members of the caucus, needed to think beyond party lines and work collectively for transition to clean energy. “We need to fully capitalize on the existing natural resource base and develop community level clean energy transition models,” she said stressing the importance of well thought-out policies and laws regarding the transition to clean energy. “The laws when made after proper debate can generate, facilitate and streamline finances and coordination among various stake holders,” she said.

Senator Zeeshan Khanzada, also from PTI, suggested to take this campaign and initiative to the province and district levels. “We need to incentivize and subsidize the domestic installation of solar panels and make this transition easy and cheap especially for rural areas,” he said, stressing the need to capitalize on the full potential of the small hydro power projects.

Senator Haji Hidayat Ullah Khan of Awami National Party (ANP) also endorsed the suggestion to launch a robust campaign for the protection of the environment before introducing policies and laws. He said it was the right time to shift from coal and fuel-based energy resources to alternative and clean energy. He urged the parliamentarians to think and act beyond party lines and vested electoral interests because it is a responsibility we owe to the coming generation.

Romina Khursheed Alam of Pakistan Muslim League Nawaz (PML – N), Member National Assembly (MNA), suggested setting up a young parliamentarians’ forum where they should be provided with all the technical support to launch campaigns and take practical steps towards the clean energy transition. “We need to engage and support the local entrepreneurs who are working on alternative energy resources at community and village level,” she said adding that the government should provide targeted subsidy on solar panel installations especially for domestic use and agriculture purposes e.g., installation of tube wells for irrigation.

Riaz Fatyana, a PTI MNA, informed that they already had a task force working on this issue. “Presently, we have only 6% renewable energy in the national grid whereas the target of the incumbent government is to take it to 20% by 2030. The developed and technologically advanced countries are either rolling back or have transitioned their coal-based plants into alternative sources,” he said. Fatyana said the country had enough laws for clean energy and transition to renewable energy. “What we need to do is to launch awareness campaigns to sensitize the public,” he said stressing the need to implement local and indigenous solutions to the alternative energy and conservation of water.

Nafeesa Shah, Pakistan Peoples Party MNA, suggested setting up an office for the members of the caucus at the parliament secretariat with the help of the government. She urged the government to provide support and resources for this.

“It is a good omen that the parliamentarians are getting to know things about climate change and the need for transition to renewable energy sources”, she said making a case for improving the governance structure and allocation of finances and funds. “We need to take the ownership of the caucus. We can’t achieve the desired results if we don’t do that,” she said emphasizing the need for a consistent forum or a committee to facilitate the caucus for finalizing TORs and action plan.

Zille Humma, PTI MNA, said it was the need of the hour to invest in the renewable energy and alternative energy sources. “We can generate electricity from hydro sources in Khyber-Pakhtunkhwa, solar sources can be exploited in Punjab and Baluchistan and wind energy can be utilized in Sindh,” she said adding that we needed to protect our environment through collective endeavor and campaigning. “Experts’ opinions are very important to make this transition sustainable. Awareness can play a key role in this transition. First, we should provide people with a viable alternative before urging them to abandon the fossil fuel or coal-based energy sources,” she further said.

Nausheen Hamed of PTI said that we need to generate discussion on the existing legislations first. She said that parliamentary action and its modalities also need to be made clear. She also stressed on budgetary demands for the clean energy transition.

Shahida Rehmani, PPP MNA, said the climate change and the need for alternative energy resources were important issues requiring special attention. “Water and energy are getting rare in Pakistan, so it needs to be taken into serious consideration, especially by the parliamentarians,” she said while highlighting the importance of the parliamentary caucus.

Aliya Hamza, PTI MNA, also emphasized the need for climate effective polices and need to propagate them. She said that we need to shift from LNG to solar energy and take a lead in the transition.

Senator Sana Jamali said participation of the youth in the energy transition is key in coping with the climate change impacts. He said: “We need to work collectively, beyond party consideration for the conservation of water and the transition to clean and green energy. Being from Baluchistan which is most vulnerable to climate change in terms of droughts, we can better understand the importance of safe drinking water and continuous supply of electricity.”

Shaza Fatima, PML-N MNA, said that we need to engage experts on green transition to formulate new policies and bring amendments in the existing laws, by making them more practicable. We also need to engage our constituencies or public in the transition to clean energy. She suggested on holding public hearings with academia and university graduates on the topic. “The more we advertise it, the more sensitivity we will produce among the public,” she said, adding that we need policy for the procurement of the tech and solar panel to make this transition robust.

She also said that we also need to introduce energy efficient infrastructure/buildings based on sustainable energy consumption patterns. Awareness campaign would play a key role in making the public aware of the coal and fossil fuel energy sources. She advocated for small and local level solutions for energy needs especially for household use.

Islamabad, August 4, 2021: Parliamentarians from different political parties joined together to discuss the importance of green parliamentary caucus for combating climate crisis and facilitate Pakistan in its transition to clean energy resources, in a meeting organized by Rural Development Policy Institute (RDPI) and Sustainable Development Policy Institute (SDPI) on August 4, 2021.

This was the second caucus meeting, where members of the proposed parliamentary caucus on clean energy agreed to continue consultations with all stakeholders for the formation of the caucus.

Parliamentarians and representatives of civil society and donor organizations highlighted the need to explore clean and green sources of energy keeping in view the best practices followed by different countries.

The participants raised different issues based on their respective experiences in order to help explore linkages between different sectors such as clean energy and climate change as well as other global urgencies which include changing weather patterns, droughts, floods, and threats to food security. An important consensus built during the meeting was that the formation of a parliamentary caucus on clean energy could play a significant role in preparing a way forward to deal with all of the above mentioned issues in a holistic manner.

In his presentation on the best practices being observed across the world for the efficient functioning of parliamentary caucuses Mr. Badar Alam from RDPI referred to several bills passed by the women’s parliamentary caucus and Sustainable Development Goals (SDG) task force in Pakistan.

During his discussion, he also mentioned the parliamentarians’ guide published by UNDP that identifies the role and responsibilities of respective parliamentarians in a caucus. However, the caucus formulation can face critical challenges since the members come from different political backgrounds with each having a separate agenda, he said.

Dr. Abid Suleri, ED of SDPI, appreciated the role played by United Nations Development Programme (UNDP) in the capacity building of the parliament and the recent initiative of the Foreign Commonwealth and Development Office (FCDO) with the British Council.

This may be a good place to introduce yourself and your site or include some credits.