Pakistan has released a new version of its long term power plan – the Indicative Generation Capacity Expansion Plan (IGCEP) for 2021. IEEFA highlighted some issues with the 2020 version in September last year. 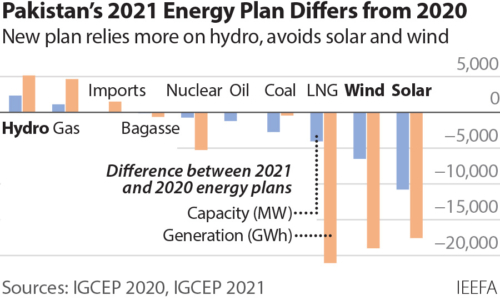 The new iteration of the IGCEP – prepared by the National Transmission and Despatch Company (NTDC) – states on page 1 that “The goal of this plan is to improve decision-making under different long-term uncertainties while assuring a robust generation expansion plan with least cost and minimum risk”.

The 2021 IGCEP does not appear to achieve this goal. In fact, although there has been some improvement in the plan, there are also a number of significant backward steps since the 2020 version.

On the positive side, the power demand forecasts for all three scenarios in the new IGCEP (low, medium and high economic growth) have been reduced. The new forecasts look more realistic than the IGCEP 2020 forecasts and are closer to IEEFA’s own high-level forecast of power demand at 2030 (Figure 1).

Excessive power demand forecasting is often the root of the costly overcapacity that is a growing issue in developing countries around the world including Pakistan.

The reduced demand forecast in IGCEP 2021 is mirrored by reduced 2030 power capacity compared to last year’s plan, meaning that some of the overcapacity baked into the 2020 version is now avoided. Overall planned 2030 thermal power capacity has been cut back by around 7,000 megawatts (MW) relative to the 2020 version. Almost 3,000MW of this is reduced coal-fired power.

However, although planned LNG-fired power capacity has been reduced, the 6,800MW of remaining planned capacity will be completely unused by 2030 according to the new IGCEP – highlighting that overcapacity has not been completely eradicated from the new plan.

In addition, planned wind and solar capacity to 2030 has been slashed by an astonishing 17,000MW under the new version of the IGCEP. The 2020 IGCEP was compliant with Pakistan’s renewable energy target of reaching 30% renewable energy capacity by 2030 but the new IGCEP has abandoned this and now only reaches 12% by 2030 (Figure 2).

The IGCEP makes clear on page 22 that “Renewable energy, including wind and solar, are quickly becoming cheapest forms of new electricity generation across the globe” and that the “trend of cost reduction for the renewable technology is set to continue in the future and will inevitably reduce the cost burdens, reliance on increasingly expensive fuels and hence lowering the overall generation cost”.

By significantly slashing wind and solar capacities – the cheapest sources of new power generation in Pakistan – the new version of the IGCEP cannot be considered a least-cost plan as promised.

Given Pakistan’s critical power system circular debt and the pressure from the IMF to address the crisis with significant power tariff increases, it would make sense to have more commitment to the cheapest sources of new power generation in Pakistan, not less. This new plan has Pakistan going in the opposite direction to the rest of the world where solar and wind installations are accelerating.

Instead, increased emphasis is placed on hydro power. The new version of the IGCEP considers hydro to be “renewable” and plans for 61% of generation to come from wind, solar, bagasse and hydro by 2030 (Figure 2), in line with the Prime Minister’s statement at the December 2020 Climate Ambition Summit that Pakistan was aiming for 60% power generation from “renewables” (including hydro).

Pakistan’s Alternative and Renewable Energy Policy 2019 (ARE 2019) set a target to reach 20% renewables capacity by 2025 and 30% by 2030. This policy represented a major step forward for Pakistan and included various renewable technologies in the target including wind and solar but not hydro. If hydro is now to be considered “renewable” then the 30% by 2030 target has already been surpassed given existing hydro capacity in Pakistan and the policy is made completely redundant.

Given Pakistan’s track record of major hydro project delays, the decision to reduce the outlook of the new IGCEP to 2030 is highly questionable. The 2020 version included a 2030 and a 2047 time horizon but the latter has now been dropped – the outlook is now only 9 years. There is a significant likelihood that proposed hydro projects won’t be finished within this timeframe.

The proposed 4,500MW Diamer-Bhasha dam has an expected commissioning date of February 2029 according to the new IGCEP making it seem at great risk of not being completed within the IGCEP’s timeframe. The huge project, which has been on the drawing board for many years, still faces many challenges and in addition to likely running over schedule, the US$14 billion suggested cost is likely to prove to be a significant under-estimate.

In contrast, wind and solar have very short construction periods that give more certainty to power development planners.

In fact, there remains some question over dams’ ability to reliably supply power for Pakistan. A recent heatwave of the type likely to occur more often as the climate continues to change has led to blackouts, as the power system was unable to meet increased demand. The fact that the large Tarbela dam was only operating at 25% of capacity due to water shortages contributed to the power cuts.

The Pakistan government insists that reliable and affordable power is one of its top priorities.

However, the policy change to include hydro within the renewable energy category, combined with a target of 60% clean energy by 2030 that heavily relies on hydro and slashes wind and solar, means that there is significant risk locked into the new IGCEP. There is a high likelihood that major hydro projects will be delayed and the 60% by 2030 target will be missed.

The positive impact of the declining cost of solar and wind is also largely foregone in the new plan which is instead exposed to the risk of major cost over-runs for the large dam projects.

The new IGCEP cannot be considered to be a “least cost and minimum risk” plan.

No links available
Back to News
Newsletter
© 2023 Alliance for Climate Justice And Clean Energy - All Rights Reserved.